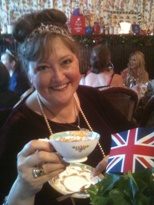 Lady Victoria is the wife of Sir Harry of Essex, who was born in London, England.  They have been married over 30 years.  Together, they have appeared in historical documentary films which were produced in the Pacific Northwest.

One especially noteworthy includes a local documentary produced for the National Parks regarding the Alaska Gold Rush from the Seattle perspective of the impact on the area. It features the character of John Nordstrom, founder of retail giant notariety.

The second documentary was filmed by the esteemed documentary filmmaker and director, Vaun Raymond.  It recalls the importance of the Suffragette Movement and Women’s Right to vote in Washington State, as it played a pivotal role in the creation to what is now the entity known as the Port of Seattle.

Lady V is the first born American in her immediate family, stemming from a long lines of proud Bavarian and Norwegian lineage.

With a nod to her European parents’ upbringing and her husband’s own home country, Lady Victoria has been very involved in the German community her whole life and more recently, in the British community here in Seattle. 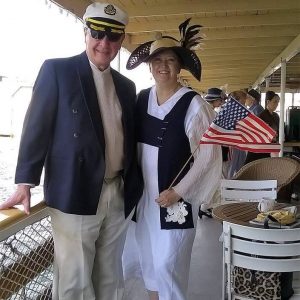 Lady Victoria appears (in the video at 5:51) aboard the historical M.V. Lotus, a 1909 wooden vessel.  This was a centennial celebration of the grand opening of the Hiram Chittenden Locks, a necessary waterway which connects the salt water of Puget Sound, to the sweet water of Lake Union.  The  MVLotus.org is a 501c3 nonprofit organization. 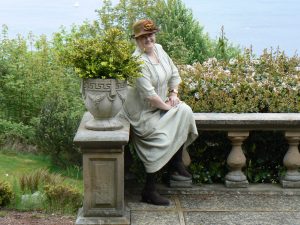 Presently, Lady Victoria of Essex serves as the President of the Seattle-centric historical costuming group, Somewhere in Time, Unlimited.  It has been in existence over 40 years.  Lady V was installed as the President in 2018.

Her field background includes, I.T., Marketing, Real Estate, and Hotel Management.  She is an accomplished singer, even having performed with the Lawrence Welk Orchestra as Champagne Lady at an early age.

Here are few images of Lady Victoria of Essex’s representation of various non-profit organizations over the years….